Today was the 31 first day in a row that I ran at least one mile.   In the world of streak running, that’s nothing.  The United States Streak Runners Association lists multiple people with streaks of over forty years.  But for me, it’s been a challenge to get out there every day and run.  It has also (I think) been a benefit.

In this past month, I’ve run 130 miles, averaging about 4 miles a day.  All of those miles have been outside.  I’ve resorted to running only one mile 6 times, and circled Prospect Park 16 times.  The coldest day was 60 degrees and the hottest was 85. I’ve run in only two boroughs, and crossed only two bridges, but my easy runs have gotten a tad faster, I’ve gotten a tad thinner, and I’ve stayed sane through the stresses of life.

I know all the criticism of streaking – that running one mile provides no health benefit, that maintaining a streak can cause you to run when you really should be recovering, and that running everyday leads to burn out and injury.  But so far, this little streak has been good for me.  One day, I’m going to have a make decision to run while sick, or injured, and then I’ll consider whether or not this stupid little project is a good idea.  But until then, I plan to get out there, every day, and get in some miles.

Here’s a short video of Rick Rayman, a Canadian dentist who has run every day for the last 35 years and finished hundred of marathons along the way.

I find the Rayman video strangely melancholic for being about a man with such interesting accomplishments. For something a bit more upbeat, here’s a great video I’ve shared before on Mark Covert ending his forty-five year streak.

Running streaks —  impressive? Stupid? Stupidly impressive? Obsessive and unhealthy or a healthy obsession? Like many runners at different points, I’ve viewed them from different angels.  I’ve found them helpful in getting me out of a rut and hurtful in getting me injured.  I have said that they are stupid and I have said that they are inspiring.  But no matter what my view has been, I’ve always been at least grudgingly impressed with those runners who lace up their shoes for at least a mile a day, every goddamn day.

According to the United States Running Streak Association, a running streak is “to run at least one continuous mile (1.61 kilometers) within each calendar day under one’s own body power (without the utilization of any type of health or mechanical aid other than prosthetic devices).”  Over the years I’ve started, and stopped, a number of “streaks”.  Some have lasted only a couple of weeks, some a little more. The longest was 114 days during which I ran 536 miles, averaging 4.7 a day. I was pretty proud of that little streak, and I think it was partially responsible for my then marathon PR, but compared to the big guns of streaking, it’s a rounding error.

For years, Mark Covert, a college runner turned track coach held the record for the longest run streak in the United States.  He ran everyday for 45 years piling up well over 100,000 miles and arguably ruining his feet in the process.  Earlier this year, having been slowed and hobbled by injuries, Mark hung up his shoes. He ran his last mile on the 45 anniversary of his first run.

Mark Covert has run way more than you have.

Yesterday, May 27, 2014, Covert’s record was surpassed by his friend and college teammate* Jon Sunderland who now has the country’s (and possibly the world’s) longest streak. 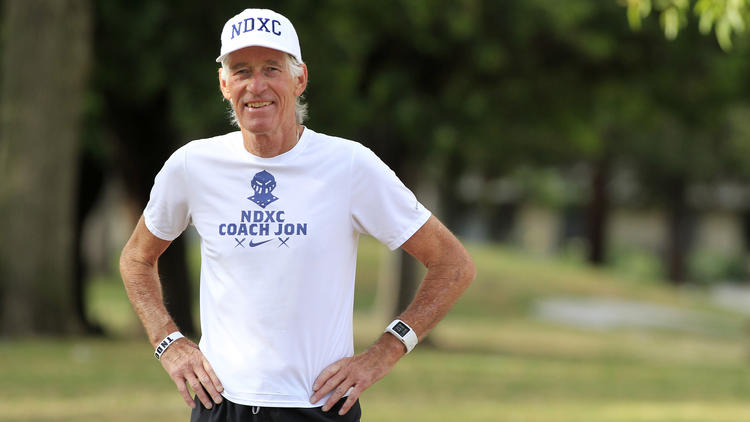 So has this guy, Jon Sunderland.

Here’s some coverage of Sunderland’s streak in the LA Times and on NPR.

Running everyday for forty-five years is beyond obsessive. It means you’ve ingrained the act of running so far into your life that is has become a part of you.  I cannot fathom doing it. I cannot even fathom why you would want to run through the broken bones, illnesses and surgeries these guys and gals have run through.** But still, inspired by these guys, I am going to set off on a little streak of my own. We’ll see how long it lasts. You can follow the progress on my twitter feed if you so desire, though lord knows why you would.

For perhaps slightly more exciting reading, check out the links I’m collecting here of the stories and blogs I find around the internet regarding run streakers.  If you’re a run streaker yourself, I’d love to share stories from your streak here on Milo.  Email me at miloandthecalf at gmail dot com.

* How crazy is it that Sunderland and Covert were teammates?  Apparently, 45 years ago, Covert told Sunderland that he’d run everyday for a year and Sunderland decided that was a pretty good idea and then they each did ran everyday for decades! Its crazy.

** Surprising no one the list of streakers is predominantly men, but there’s plenty of women.