A collection of the classical sources for the Milo stories. More on Milo can be found here.

On Saving Pythagoras and the Philosophers:

Milo, who was the most renowned of wrestlers, and lived in terms of intimacy with Pythagoras, who abode long in this city[meaning Croton]. They relate that at a banquet of the philosophers, when one of the pillars in the hall gave way, Milo sustained the ceiling while they all escaped, and afterwards saved himself. (Strabo, the Geography, VI, 12 trans. Hamilton)

Critical of Milo for his reliance on brawns over brains:

Nothing can be more truly contemptible than a circumstance which is related concerning the famous Milo of Crotona. This man, when he was become old, observing a set of athletic combatants that were exercising themselves in the public circus: “Alas!” said he, bursting into a flood of tears and stretching forth his arm, “alas! these muscles are now totally relaxed and impotent.” Frivolous old man; it was not so much the debility of thy body as the weakness of thy mind thou hadst reason to lament, as it was by the force of mere animal prowess, and not by those superior excellences which truly ennoble man, that thou hadst rendered thy name famous. (Cicero, Sen. 9.27, trans, Melmouth)

Whoever has a reasonable portion of strength, and exerts it to the best advantage will feel no great need of more. Milo is said to have walked the race course at Olympia, carrying a live bull on his shoulders. Which would you rather have, strength like his, or a genius like that of Pythagora? Employ the boon of bodily vigor well while it remains; when it is gone, do not bewail it, unless indeed, young men should crave boyhood, and the middle-aged should covet youth. (Cicero, Cato the Elder: Or, a Treatise on Old Age 10.33) 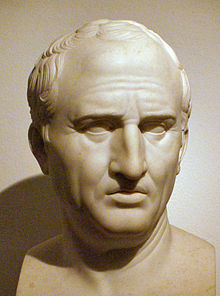 On Milo and the Wolves:

It is likely that, trusting to the same strength, he met his fate as related by some, for whilst making his way through a thick wood, he strayed considerably out of the path, when finding a great log with wedges in it, he thrust both his hands and feet into the fissure, intending to split it completely, but was only able to force it enough to let the wedges fall out, when the gaping log presently closed on him, and he, being taken as in a snare, was devoured by wild beasts. (Strabo, the Geography, VI, 12, trans Hamilton)

Milo and the Wolves