Continuing the  parkway theme from last week, my original plan for this weekend’s long run was to run down Ocean Parkway to Coney Island, but then Hurricane Irene came along, they turned Coney Island into an evacuation zone, and E all but forbid me running down there. So loops in Prospect Park it was. 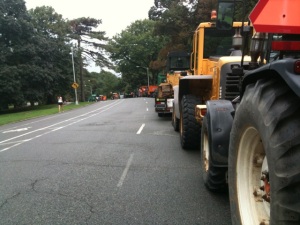 Trucks lined up for Irene

Intermittent storms, a worried wife, and unbearably humid conditions meant I only did ten miles. They were fun, if sweaty, miles. A lot of people were out in the park, considering the weather was pretty nasty. I guess everyone wanted to get some outdoor time in before being cooped up for the storm. Last night when we were watching the coverage of the hurricane, twice I saw runners behind the reporter. Once it was during a report from the Central Park, at twelve thirty at night. Twelve thirty, on a Saturday, during the hurricane. I love New York runners.

Today after the storm I did another loop in the park. The damage is pretty minimal. A couple of trees down, some flooding in the areas that always flood, and again a lot of runners out. Gotta get the miles in, I guess, no matter what the weather. 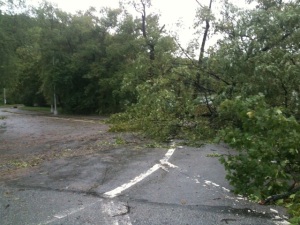