Milo and the Calf is a project managed by me, Sean, with occasional contributions from others.   I am a father, husband, attorney, runner, reader, cyclist, swimmer, push up enthusiast, and wanna be classicist living in Brooklyn, NY.

Professionally, I have worked in social justice nonprofits most of my adult life. Now I am an attorney focusing on exempt organization law. I work in the general counsel’s office of a large New York City based nonprofit. You’ll see almost nothing about my work as an attorney here.

That said, there’s a lot of other stuff going on here. Its kind of a mess, but most of it has to do with endurance sports and books.  You can see the most popular posts over here. For more info, scroll on down to the “Guide to the Maze” section of this post. Get in touch at miloandthecalf@gmail.com 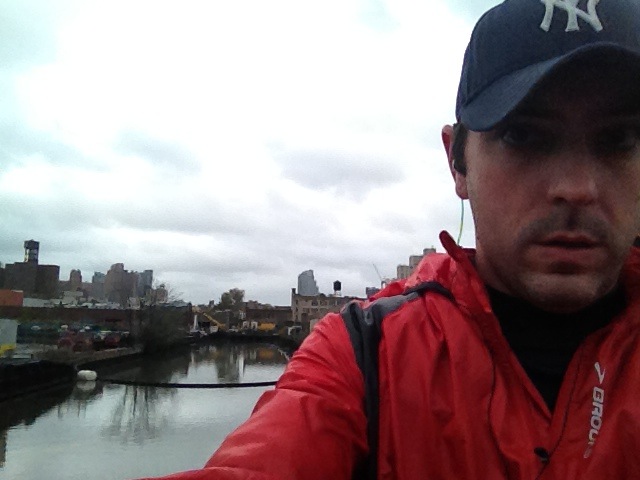 Your humble editor at the canal, the smell was pretty bad… even for industrial Brooklyn.

Why Milo and the Calf?

There are many versions of the story of Milo of Croton and the calf. Today, I’ll use this one:

To become the greatest wrestler in Greece, to win six Olympic laurels, Milo had to train like the rest of us.  His method?  Borrow a new born calf and carry it around Croton day after day, week after week, and month after month.  As the calf grew, so did Milo’s strength, until he was the strongest wrestler in Greece and could carry the now full grown bull upon his back.

What did he do once the bull was grown? He ate it.

That’s what we’re about here, carrying the weight, getting in the miles, doing the work, day in and day out, making small gains, occasionally dropping the calf, but always picking it back up.  It’s a simple enterprise – do the work, get better.  At sport, at life, at everything.

When I started this blog, I wrote almost exclusively about running. Now it is more of a buckshot affair.

I post about running, cycling, swimming, and combining all three into a weird contemporary sport called triathlon. I also post a lot of book reviews and occasionally about my interests in learning ancient languages, watching professional sports, thinking about classical philosophy, and practicing Judaism.

There are times when I post about other stuff.

What can I say? I contain multitudes.

In today’s day and age, it doesn’t really matter.

Odds are, you came to this site through a google search, or a referral from a social media platform and you’re not going to read everything I write on here.

So, here’s a little guide to popular parts of the maze:

By far, the most popular section of this website is the Boston Qualifier Questionnaire, where I interview runners who have qualified for the Boston Marathon. There are now over 200 interviews for you to read there.

Other parts worth exploring include the resource page on Milo of Croton and all the other resources and inspirations I’ve collected (including the perennially popular series of posts on the running cult/new religious movement Divine Madness).

I also write a lot about books, a guide to those pieces can be found here.