The largest influences on the book that I am aware of, at any rate, were Michel Foucault (primarily Madness and Civilization, secondarily The Order of Things), John Ashbery’s poems The Instruction Manual (and the Richard Howard essay on Ashbery in Alone with America) and These Lacustrine Cities, G. Spencer Brown’s Laws f Form (given me as a birthday present, months after its publication, by a young Harvard student when I lived in San Francisco), Frank Kermonde’s Sense of an Ending (bits and pieces of Dhalgren were worked on in Kermonde’s old office at Wesleyan University’s Center for Humanities, where I was a guest for a couple of weeks in 1971) and, of course, the works of Jack Spicer, whose memory and whose poems haunted San Francisco the years I lived there, where much of Dhalgren’s first draft was written, as Cavafy’s hovered over Durrell’s Alexandria.

– Taken from “Of Sex, Objects, Signs, Systems, Sales, SF”, Samuel Delany, 1975. This essay was to appear in S-Forum, a zine published by the University of New Hampshire’s Science Fiction society, Tesseract. The relevant issue of S-Forum never appears and “Sex, Objects…” eventually appears in the Australian Science Fiction Review and subsequently in the collection Straights of Messina. 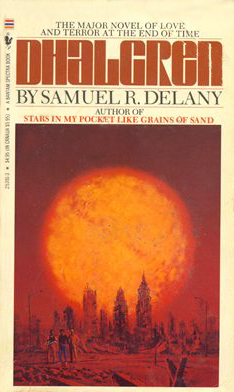