Its marathon season, which means the New York Times is once again including some running coverage in its sports section.  Today, there was a great little article about Phil Coppess who has held the Twin Cities Marathon course record for over twenty years with a time of 2:10:05.

The article is good read for all of us who struggle to fit in training with a full time job and family responsibilities – if Coppess could run a 2:10 while work in a factory and raising three kids on his own, what’s your excuse?

What did it take for Coppess to set the record?  From the article:

Coppess eventually designed a training regimen that dovetailed with his rotating shifts at Clinton Corn and his parenting responsibilities; he was awarded full custody of the children in a 1985 divorce. He ran 14 to 15 miles on work days, longer on his days off, carrying a palm-sized stopwatch to record each mile. “I didn’t think it was a good 20-miler unless I had gone under two hours,” he said. One day a week, he did a track workout, and on another, hills. Physical therapy consisted of weekly chiropractic adjustments. 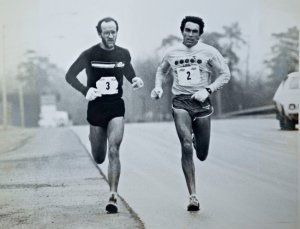 Coppess is on the left

I love the old days when no one was afraid to run big mileage.  And I’m a sucker for stories about regular guys with a passion (and in Coppess’s case, a talent) who win.  What’s particularly amazing about this story though is not only was Coppess able to run a 2:10 with everything else he had going on in his life, but that no one has come along in twenty years and broken the record.  If Twin Cities was a bigger marathon, this wouldn’t be case, but the fact that this blue collar amateur’s course record has stood for more than twenty years is just wonderful.  Someday it will be broken, but Coppess will always be an inspiration to those of us who are just trying to get in some miles after work.