Since I started obsessively logging my workout activities on Running Ahead, I have fantasized about crossing the line into serious jock-hood – spending ten hours or more exercising in a week.  I have come close a number of times, but never got there until Hurricane Sandy. This past week I climbed for two hours.  Ran thirty miles in roughly five hours, rode my bike thirty six miles in three hours and did other body weight work for another fifteen minutes.  Totaled up, that’s just over ten hours of exercise.  Its funny what you can do when you have to get to work and the trains aren’t running. 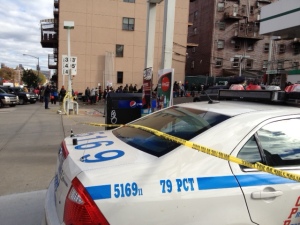 A crummy photo of a gas line on the marathon course.

Two hours of that time and thirteen of those miles came on Saturday when I ran part of the marathon course going down Bedford avenue through the Hasidic part of Williamsburg.  There are three gas stations on that section of Bedford.  Only one had gas, and the line for it stretched for ten blocks.  Police officers were patrolling the line, and pumping the gas.  It was an orderly but surreal scene.  I wrote repeatedly on this blog about how I wanted the marathon to go forward, but seeing those lines this weekend, I cannot imagine how it would have been possible.

I was expecting to be more excited about this little jock milestone, but the destruction we’re seeing everywhere along the east coast, the gas lines I ran past  on Saturday, the nasty  fight over the marathon, and the stories I heard while volunteering at a donation depot yesterday have left me unexcited about my stupid workout records. 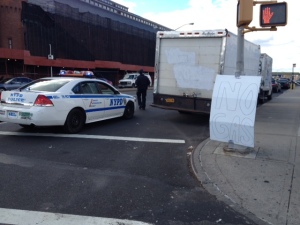 No gas at the corner of Bedford and Atlantic Avenue in Brooklyn.

The time running and biking helped me deal with the insanity of this week, but they were a luxury I was afforded because I was lucky enough to live in a neighborhood on high ground.  Perhaps the next ten hour week will feel more triumphant, but for now I plan on running again tonight and donating to New York Cares.  I hope you’re doing the same.