In 1982 when New York Road Runners and Front Runners partnered to host the first ever Front Runners New York LGBT Pride 5 Miler, the world was a very different place.  Sodomy laws were still prevalent throughout much of the country; the AIDS crisis was killing the community (and Reagan had still not said it name), and many LGBT New Yorkers were forced to work and live in the closet.

From the start, the Pride Run was intended to be  a part of the Gay Pride march and celebrations.*  It created a place where LGBT athletes and allies could compete and declare their pride in being gay and their support for the gay community.  Year after year, decade after decade, Front Runners and NYRR have put on this race.  As Pride weekend became less political, and sodomy laws were overturned; as the fight against HIV/AIDS gained momentum, and state after state introduced first anti-discrimination protections and, later, marriage equality, the Pride Run was always there, getting the running community together, gay and straight, to run.

I like to think in some way, by putting LGBT athletes and their allies on center stage in Central Park year after year, the race has in some small way furthered the cause of LGBT rights. I think the races founders would agree.

I wonder what those early runners who are still with us think when they see the race today. The Pride Run sells out every year, and is coupled with fundraising for gay rights causes.  It brings a diverse group of runners, from serious amateurs to first time racers, to run through the upper half of Central Park in racing singlets and rainbow tutus accompanied by the cheers of supporters, and the waving of tourist’s iphones.

It’s a pretty fun race, and I am more than a little ashamed that this year was the first time I ran it (40:01).  It wasn’t my best run (the course is hilly! I wasn’t hydrated! The run streak is killing my legs!), but it wasn’t my worst.  And there are surely less enjoyable ways to spend a Saturday morning than sweating your ass off trying to keep a sub 8 pace.

Obviously, the fight for LGBT rights is far from over, and of course a little race in Central Park is not the front lines of any struggle.  But the continuity through change that the race represents gives the Pride Run a special place in New York’s Gay Pride celebrations, a place I was proud to share for one day.  I wonder what it, and the landscape of equality, will look like when my son is old enough to join me. 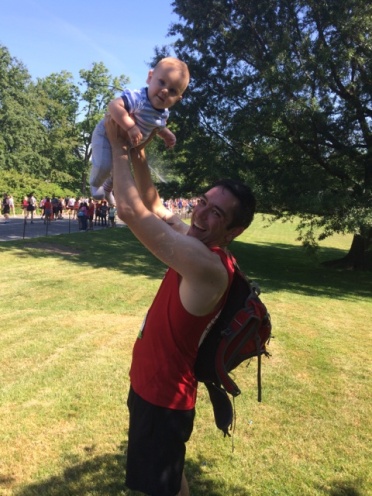 *For a history of the early years of  Front Runners New York and the race, check out the recollections of one of FRNY’s founders, Steve Gerben.  NYRR should be proud that it was on the right side of history so early.