I was born into a middle class Irish American Catholic family in Bridgeport Connecticut in the 1970s. I grew up mainly in the small town of Rockville, Connecticut in a family with a mother, a father and two sisters. I wasn’t the best student in school, often bored and distracted. I was more interested in the reading and experiences I was having outside the schoolhouse than in it and it showed in my grades.

In high school, I was involved in the surprisingly robust punk rock scene developing around me, including contributing to various fanzines of pretty universally poor quality. The world of misfits, geniuses, self starters and weirdos that punk rock introduced me to changed my life and I cannot imagine where I would be without it.

Eventually, after barely graduating from high school, I moved to New York City. While in New York, I got involved in the club/rave scene then popular in the city, while maintaining many of my friends from the punk rock world. I lived first in Williamsburg, Brooklyn, then the Lower East Side and worked as a clerk in the now defunct Tower Books, an experience, which though I didn’t know it then, would be formative in my development. Books stores, and books, would become one of the central refrains of my life.

After about a year, I split New York, taking a bus to the Bay Area. I lived first in a ramshackle punk rock house on the Oakland Berkeley border working as a tele-fundraiser and house cleaner. Eventually, I moved to San Francisco, first in the Tenderloin, and then behind an anarchist bookstore in Haight Ashbury. I worked a number of not very good jobs including as a shipping clerk, truck loader and clerk in a book store (again, though this time in the famous Green Apple). I became very involved in left politics, joining the collective that ran Bound Together, an Anarchist bookstore. I was part of the team that established the Bay Area Anarchist Book fair and was involved in scores of demonstrations and actions. I was also deeply involved in the punk rock music scene, going to hundreds of shows and volunteering at the legendary punk rock music magazine MaximumRockNRoll first as a zine reviewer, and eventually as one of the “coordinators” of MRR, co-running the magazine for a bit more than two years.

Running MRR is one of my proudest accomplishments, and I wish I’d stayed longer. But love brought me back to New York City where I got another crap job (in a video duplication house) and immersed myself further in politics. I spent scores of nights in my twenties in meetings in activists spaces, apartments and cafes. I was one of the founders of Critical Resistance NYC, a prisoner rights organization and helped organized our conference at Columbia University. I also worked on immigrants’ rights and other issues for a number of different organizations.

Somewhere along the way, it began to dawn on me that I’d reached an end of sorts for what I could do, both professionally and intellectually, without a college degree. So I started attending Brooklyn College at night and on the weekends as part of a program for “returning students” (read, old people). At the same time, I was working in communications for the legendary impact litigation organization, the Center for Constitutional Rights (CCR). At CCR I was lucky enough to work on a number of historic cases, including the defense of the prisoners at Guantanamo Bay and other post-9/11 litigation.

I was inspired by the work being done by the litigators at CCR and as graduation approached (double major in economics and philosophy), I began applying to law schools, eventually being accepted at Georgetown. I left CCR, upended my life, and moved to D.C. Soon after arriving in D.C. a long term relationship ended and I began spending time with a gorgeous and brilliant New York transplant known around here as E. Someday, she’d be my wife.

In law school I focused my studies on so-called “corporate” law, taking advanced classes in taxation and corporations. I also started running regularly, something I still do today, despite being down-right terrible at it. I spent my first summer of law school working for a law firm in Cairo, Egypt, and my second with a law firm in D.C. which specialized in representing nonprofits.

After law school, I accepted a position with the D.C. firm while E moved to New York to begin work at her firm.  Six or so months of long distance relationship followed, during which I underwent a conversion to Judaism which is complicated and personal and hard to explain. Eventually, E and I got formally engaged and I moved back to New York, taking  a position as a staff attorney with the Fair Housing Justice Center, where we litigated cases of housing discrimination. Thereafter, I worked briefly at a boutique litigation law firm before returning to my area of passion – working for nonprofits. I now work as in-house general counsel for a large New York City criminal justice  nonprofit.

Professionally, I’m an expert in exempt organization law and am interested in reforming the criminal justice system and ending mass incarceration. I’m also interested in the way technology, particularly A.I. and machine learning have changed the way we work (or if we do at all). Privately, I’ve continued my interests in all the random stuff you see around here – running and other endurance sports, reading, ancient history and thought, Judaism, mindfulness, health and nutrition, and whole bunch more.

What can I say? I contain multitudes.

Though I rarely write about it here, the most important pieces of my life are my family –my wife, E , and our kids L born in December of 2013 and A born in May of 2016.

If you’d told 20 year old me splitting a room in punk house in Oakland that someday I’d be a lawyer, with a wife and two kids and a weird internet site where I wrote book reviews and stuff about running, I’d have thought you were crazy. Yet here we are. 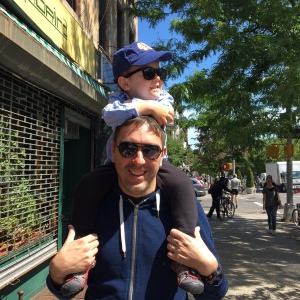 When not blogging, running, or working, I carry small children on my shoulders.

21 thoughts on “Me (in just about a thousand words)”