The first in a series recounting my long run adventures.

I have run over 1600 miles in Prospect Park, much of it on the 3.3 mile main loop of the park. It has, as you might imagine, gotten a little boring. In an attempt to branch out, see more of the city by foot, and keep things interesting I’m going to try and stay out of the park more, especially on my long runs. This weekend’s course was developed with three things in mind – avoiding the park, staying in the shade, and running a work related errand. 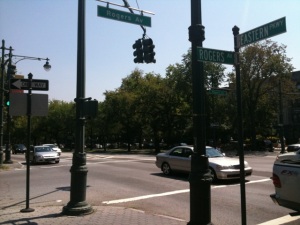 With these goals in mind I started out from my place and ran up to Eastern Parkway, the leafy promenade that runs from Prospect Park to the far edge of Crown Heights. Eastern Parkway was designed by Fredrick Olmstead, the genius who brought us both Central Park and Prospect Park. I love Olmstead and not just because he is a Connecticut Yankee like me. The concept of the parkway was to create a tree lined avenue which would take residents into the park. Originally there were to be four of these leading into Prospect Park from every direction, but only two were completed, Eastern and Ocean. I might run Ocean next weekend.

I love Eastern Parkway, running it from the park to Ralph Avenue takes you through the hipsters of Prospect Heights to the Chabad Hasidic Jews, Caribbean immigrants, and African Americans of Crown Heights. The Parkway continues past Ralph all the way to the Greenwood cemetery, but it isn’t nearly as nice (or as shaded) after Ralph, so I cut things off there today and turned around.

Back down Eastern Parkway I took a right down Bedford Avenue running through Crown Heights into Bedford Stuyvesant. I ran a quick errand in Bed Stuy, checking out a building for work, taking photos in my sweaty running clothes and getting stares. It was fun. Then it was down Bedford through the Satmar Hasidic portion of Williamsburg and over the Williamsburg Bridge.

The View from the WillyB

Williamsburg, as you may know, is the epicenter of all that is hip in New York. The Williamsburg Bridge is a fashion show on a Saturday afternoon –  Rayban sunglasses, boat shoes, impractical bikes. I am not sure if the woman on the bike with the retro eighties halter sweatshirt top meant to show us all her breast, and she rode down the bridge, but show us all her breasts she did.

The Williamsburg drops you off in the center of the Lower East Side. Historically the LES was a ghetto for newly arrived immigrants, now it is a play land for dudes with beards in flannel shirts. At this point, I knew I was short on mileage, so instead of just heading down to the Manhattan as I originally planned, I headed up the East Side for a bit, dodging skaters and people who rarely ride their bicycles. Around 14th street I turned around and headed back down to the Manhattan, a much more proletarian bridge than the WillyB, the Manhattan is stocked with runners and Chinese and Mexican dudes on Huffys. No breasts were seen. 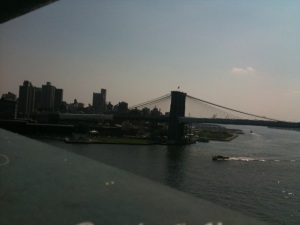 Looking at Brooklyn from the Manhattan Bridge

Off the Manhattan and onto Flatbush Avenue for the final push home. Once again surprised at how many tourists there are in downtown Brooklyn nowadays. Hot and hurting by the time I got to Flatbush and Atlantic and still needing a another mile, I went the long way home and clocked in at 17 miles in 2:54:57. Another one in the bag.

2 thoughts on “The Long Run: A Parkway and Two Bridges”