After a couple of weeks of not running any bridges, this Saturday I was back at it and  checked two of the lowest hanging fruit– the Manhattan and the Brooklyn — off my list.  That’s seven down, eighty-four to go.

Over the years, the Manhattan Bridge has been a staple of my running. I’ve run over it dozens of times as part of my running commute and on countless long runs.  Once, I did a back and forth on it it at nine o’clock at night to deliver a set of keys to E.  It’s my favorite of the “big four” East River bridges.*  To me, its the quintessential no nonsense New York City Bridge. Encased in fencing, it’s the ugly cousin of the majestic Brooklyn Bridge.  It doesn’t have the best views, or the nicest entrances, but if you want a no bullshit means of getting from Brooklyn to Manhattan, whether it be by train, car, bike or your own two feet, it can’t be beat.

For runners coming from Brooklyn, the entrance to the Manhattan Bridge is located near the corner of Jay and Sands Streets.  Take the stairs to your right, not the bike path to your left.  For runners entering from Manhattan, use the entrance on the south-east corner of Bowery and Canal.  Remember that the south walkway of the bridge is for pedestrians; the north walkway is for bikers.  Inevitably, when you’re on the bridge you’ll see someone doing this wrong – don’t be that person.

Saturday was such a gorgeous day, even the Manhattan was crowded with walkers, runners, and tourists setting up fancy cameras to take pictures of the Brooklyn Bridge.  I cruised along, listening to Big Krit, and taking a couple of pictures.  I exited onto Canal Street and weaved my way down through Chinatown and the courthouse area to the entrance to the Brooklyn Bridge. 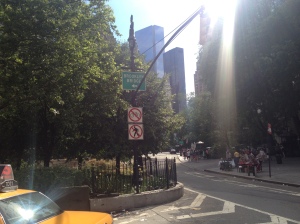 If it’s a gorgeous day in New York, the worst place in the City to run is the Brooklyn Bridge.  It is bumper to bumper with thousands of tourists.  Frankly, no runner belongs there. I certainly didn’t, and I tried to get it over with as quickly as possible. I weaved between families on citibikes and tourists taking selfies.  I couldn’t even bring myself to stop to take a picture.

The Brooklyn Bridge is majestic, with stunning views of the city and the statute of Liberty.  If you’re visiting New York, you really should go. But its better enjoyed as a leisurely stroll than on a run.  If your dead set on running the Brooklyn Bridge, I suggest you go early. Whether you’re walking, running or biking, entrance on the Manhattan side if from City Hall Park at Centre Street. You cannot miss it.  On the Brooklyn side the main entrance is at Tillary and Adams.  There is also a less obvious entrance closer to the water at Prospect and Camdan Plaza.

I exited at Tillary and headed back past the Manhattan toward the Navy Yards.  I wanted to add a couple more miles to the day so I overshot my house, and cruised up Washington to Eastern Parkway.  It was a perfect day to be out exploring, but it was getting late and my legs were tired.  I called it a day at nine miles, went home, and put the little dude to bed. Next week is a cut back week, and I don’t think they’ll be any bridges.  But the week after than, I plan to knock another couple off the list.

Slowly but surely I’ll get them all. I’m not in a rush, I’m not going anywhere.

*The “big four” being the Brooklyn, the Manhattan, the Williamsburg and the Queensboro.  By the way, I just made up that designation.