Race reports are boring for everyone but the runner who writes them. This one is probably no different. Yet when you spend over four hours running around New York City for no goddamn reason, you want to memorialize it somehow. Here’s some thoughts on my day.

5:30 AM I’m out the door and off to the Prospect Park Track Club bus to the start.

6:30 AM We arrive on Staten Island. It is almost four hours before my scheduled start time. I love the New York City Marathon, and I understand how difficult it is to get 50,000 runners into the park for the start, but sitting on a trash bag in a parking lot for four hours sucks.

I talk to some PPTC team mates and some stranger from Italy and Illinois. I listen to a podcast and generally mill about. The time passes, slowly.

9:45 AM I make my way to the starting corral. Chaos reigns. For a minute it looks like a couple of hundred runners in my corral are not going to get a Wave 2 start, but eventually, the powers that be relent and we make our way to the bridge.

10:15 AM Gun goes off and we’re running. I’m using a 3:59:00 pace band I downloaded off the internet and I follow it religiously for the first 16 or so miles. The pace chart called for going much easier than I wanted to up and over the bridge. I hoped that taking it easy early on would pay dividends later on down the road, but as will become clear, it wasn’t to be.

11:15 AM – 12:15 PM* I  cruise through the early miles and get to 4th and Union where PPTC, E and friends J and M are cheering their heads off. I look for my son, but as I will learn later, he’s dead asleep in his stroller. The miles through Park Slope and Fort Greene are my favorite part of the course. Huge crowds, tons of bands, and drum circles. Friends, it seems, on every corner. I see R, L and T all within a mile stretch. T is so excited he trips me. I’m hitting my mile pace goals without too much trouble. I begin to think this is my day.

12:15 PM The Queensboro Bridge. Last time I ran New York, this was where the wheels really came off the bus. But today, I’m feeling good. Those around me? Maybe not so much. New York really isn’t a PR course, and that’s for a lot of reasons. The hills, the winding course, and the fact that the roads are packed with runners all make the course amazing, and not particularly fast. I make it through the bridge without too much trouble, but not at the pace I was hoping for.

12:15-1:15 PM The crowds on First Avenue are enormous, and they make a hell of a lot of noise. But somehow (and maybe this is hometown bias) they don’t have the organic wonder of the Brooklyn scene. Still, they help. I’m definitely starting to feel the miles. I begin making deals with myself. I do math — hoping I can come up with a calculus that gets me across the finish line in under four hours. Yet despite my best efforts, at the base of the Willets Avenue Bridge, it all begins to go wrong. My left leg starts cramping. I stop to stretch, but that makes the cramping worse. I walk a bit, run a bit, and plod along. I see my hopes of a four hour marathon fade.

1:15-2:15 PM Dark days. I run some, I walk some. The cramping in my left leg comes and goes. I begin itemizing everything I did wrong in my training. Missed too many runs, ate too much bad food, didn’t do enough speed work, didn’t do enough in weekly mileage, didn’t get enough sleep. It’s a long list,* and I have plenty of time to itemize it.

Still, this is New York, and it is fucking amazing. Reggaton DJ in the Bronx, gospel choir in Harlem.  Huge crowds at every corner.

2:15-2:30 The finals stretch through Central Park. I’ve given up on a good time. Now, I’m just trying to have a good time. I waddle along, knowing a PR is well out of sight. I high five the kids, I remember how lucky I am to be here at all, I thank my stars that I’m not being carted off the course by the medics.

It’s a cliché that a marathon is made up of the stories of thousands of individual runners. But as it is with most clichés, it’s also true.

In the final miles of a marathon, everyone is stripped to the bone.

Whether you’re finishing in three hours or five, you’re gutting it out after mile 22.

It’s an incredible thing to be part of, for runners and spectators alike. Runners are putting their hearts and bodies out there on the pavement. Spectators lining the course can see exactly how much you’re hurting and exactly how badly you want it. They cheer you on. They tell you you’re looking good when you look like shit. They tell you to push harder when you can’t do anymore. No other sporting event is like this – where the athlete is the neighbor of the spectator, where one weekend you’re the watched, and the next, the watcher. We forget how special this is, but we shouldn’t.

2:30 PM The finish comes into view and I’m just glad to be done. 4:23:13 will be my official time. Not my worst marathon, but also certainly not my best. They’ll be plenty of time for reflection in the days to come. Now, I just want to get the forced march out of the park done and give E and the little dude some hugs. I finally make it to the PPTC reunion school where I’m greeted with applause. Of the many things I’ll take away from this day, one is a new appreciation for what a great group of people make up PPTC.

I finally find E and L in the playground next to the school.

L runs up to me and shouts “Daddy, run!” 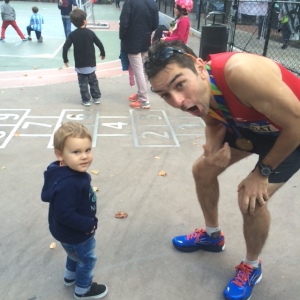 ** And one I’ll go into in a subsequent post.

Not enough information in the last 1500 words? You can see my strava data here.