Adapted from a blog post written long ago for something else.

“A disproportionate part of my professional life has been devoted to protecting the deservedly rich from the predations of the poor and downtrodden, and it is not easy to see why that deserves a medal”

I didn’t really know Martin Ginsburg, but his death deeply effected me. He was, as you know, the husband of Ruth Bader Ginsburg. He was also perhaps the world’s leading authority on the US Tax Code, a generous professor, probably a genius, and a total mench. I took his class on corporate taxation when I was at Georgetown and it was by far the hardest class I took there, or anywhere. Ginsburg wasn’t a natural professor. He was too smart, and would often have to explain the same concept to a room full of confused students three or four times before we got it. But he was always willing to explain it again, dumbing it down a little further each time, until we got it. He was incredibly generous with his time and ridiculously funny.

He was a great lover of literature and a big time music nerd. In attempting to relate to his students, he would often say things like “is anyone here interested in the works of Gluck?” or “who here remembers the opening scene in Moll Flanders?” When we responded with dumb stares, he would chuckle.

Martin Ginsburg liked to fuck with us.

In addition to being one of the best tax lawyers the world has seen and a scholar, there was much in his marriage I admired. Early in his marriage to Ruth, Martin took on child raising duties which were not common for a man of his era and education. He was the one who often put the kids to bed while Ruth worked late, and for most of their lives together, he did the cooking. She moved to New York for his work, and then he moved to DC for hers. Justice Ginsburg has said many times that she wouldn’t have gotten where she did without Martin, and I think that’s true. I don’t know if he thought of himself as a feminist, but he is definitely an inspiration to me. As he said in response to a question regarding his role in his marriage to Justice Ginsburg “I have been supportive of my wife since the beginning of time, and she has been supportive of me, It’s not sacrifice; it’s family.”

When E and I got married, we included this line in our wedding program. I sent a copy of the program to Justice Ginsburg. She replied with this note: 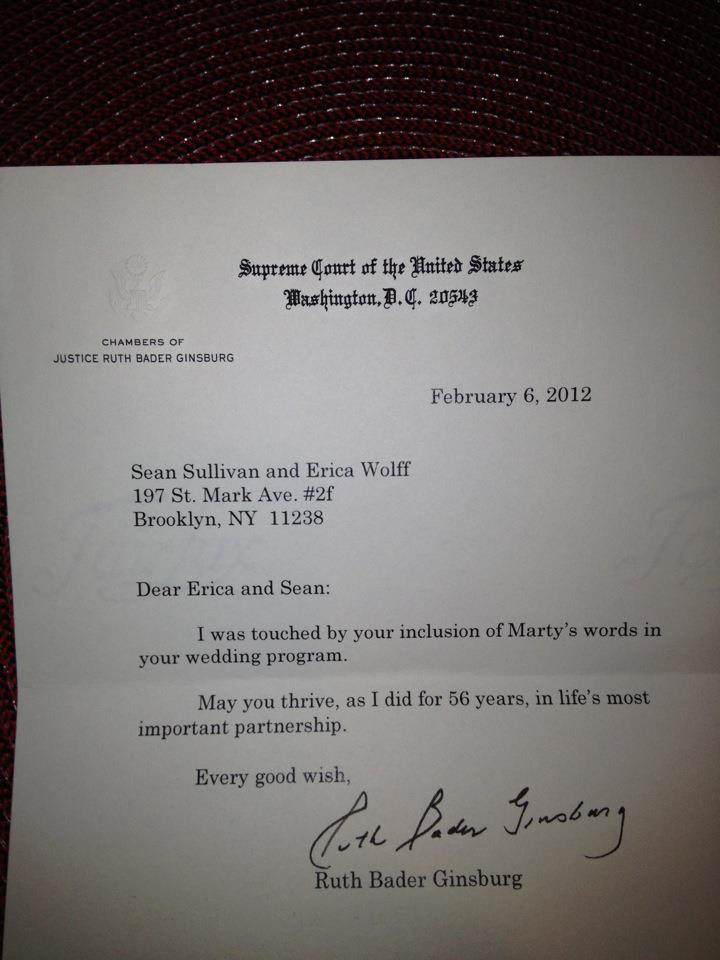