The NICU at NYU is staffed by incredible doctors and nurses doing everything they can for an array of preterm and ill babies. It’s an incredible place, filled with incredible people. It is also cramped and loud. Monitors are going off incessantly and just about everyone has a worried look on their face. There is no place to comfortably sit. Everyone is in everyone else’s way. Kind as everyone was, it isn’t a place you wanted to spend time.

And yet, here we were.

While E was recovering from labor, I went up to see how Baby A was doing. She was, at first, on the monitors, but without supplemental air or an IV. As described below, in the coming days, this would change.

All and all, she was doing well for now. The nurses were unconcerned, but cautious. Many pre-term babies have a sort of honeymoon period directly after delivery, with complication occurring later. Still, we were hopeful this would be painless.

I wheeled E down to see Baby A at about 7pm and went home to our son. E stayed with her till midnight. Holding her and pumping breast milk at her crib side. The next morning, I’d return to see our little one again. The day after, E would come home and we’d trade off being with Baby A and being with our son, day in, day out, for the next ten days.

As NICU stays are probably what most parents are curious about here’s a day by day breakdown of what happened with Anna:

Post script.
First doctor’s visit and she’s gained three ounces. Great news. Bad news – they’ve detected a heart murmur. Another trip to another doctor, this time a pediatric cardiologists for an EKG and an echocardiogram. A couple of nervous hours later, we get the word – Anna has a functional murmur. She’s fine. We’re on our way.

She’s been home now for almost a week and we’re completely in love with her and so, so happy to have her here. They’ll be more tests, I’m sure, and more bumps, but all in all, we were very, very lucky. If you’re a mom or dad worried about your own pre-term baby, I wish you all the luck. Stay strong.

Read about our PPROM stay here and our labor here.

Its funny how things work out. With all the bumps we’ve hit bringing the baby home, labor and delivery were the smoothest parts of the road. E went into active labor at around 3 am on May 3rd. By 11:30 am she was pushing. By 12:33, our daughter was in the world.

We were of course overjoyed and terrified. Would she be ok? Would they need to rush her upstairs to the NICU? What happened from here would determine the rest of our lives.

She came out screaming and red with anger. The NICU team began their examination but we soon joking and chatting with each other and us. “They’re joking,” I whispered to E, “that has to be a good sign.”

Anna was 5 pounds 6 ounces — big for a 33 weeker, and she was doing well. They let E hold her for thirty minutes or so while Dr. A worked to removed the placenta. Turns out, the placenta was the hardest thing about the delivery and there was some concern it wasn’t all removed. So, after too short a time, the baby was taken to the NICU and E was taken in for a DNC.

With no complications from the DNC, E recovered quickly and was soon making her way up to see our daughter, Anna.The whol thing had been remarkably smooth and painless, but there’d be more hurdles to overcome in the NICU.

Read about our PPROM stay here and our NICU stay here

Anna, soon after admittance to NICU.

When my wife’s water broke at 29 and half weeks gestational age, I immediately started googling. “born 29.5 weeks” “preemie 30 weeks” “water broke 29 weeks” etc, etc, etc. I read stories of incredible women and families who dealt with very severe health issues, or almost no issues at all. I read message boards, blog posts, and watched youtube videos by the score. Whether the stories were happy, or sad, I got great comfort from increasing the amount of information I had and in learning from families that had dealt with what we were facing.

So, to add to this pool of google-able information, I’m sharing our story of having a premature baby. I’ve split this up into three sections: the story of E’s water breaking, the story of labor, and the story of our stay in the NICU. I hope this helps out any other parents out there dealing with a similar situation.

Spoiler alert: Baby and Momma are home and doing well. There are still scores of doctor’s visits, tests, and appointments in our future. But so far, so good. Our baby girl is here with us and she is perfect.

E woke up on April 5 and noticed she’d had a somewhat unusual discharge. She felt fine, and wasn’t particularly concerned. Just to be on the safe side, she went to the doctor. A quick sonogram at the doctor’s office and he sent her to the hospital – he feared she’d had an “abruption” or tear in her placenta.

This shit can be serious to the health of the baby and the mother. At the hospital, the baby was put on monitors for her heart rate and contractions, and E received a steroid shot for fetal lung development in case the baby had to come early. All looked well, as we waited for the sonogram room to become available. After more thorough sonogram it was determined that she hadn’t had an abruption. Whew. Now, they just wanted to do a quick physical exam and then we could go home.

Except — oh shit. A physical exam reveals that E’s water has broken. Everything changes. We are not going home. Doctor’s who were joking become serious. Nurses move into action. Our OB is called.

E is moved to an ante-partum room for women with pre-term ruptures or labor. She is given magnesium for fetal development and scheduled for a second steroid shot the next day – if she makes it that long without delivering. Our doctor arrives and says that while 50% of women give birth to the baby within a week of a preterm premature rupture of the membrane (ie PPROM), it was always possible that E could go longer, or, possibly, reseal entirely. We just had to wait and see.

So, we cried again. We worried. We dealt with logistics. E continued on the magnesium, which made her groggy and ill, for the next 24 hours. No baby. Another steroid shot. More waiting.

Friends brought food to the house. People spent time in the hospital with E. Grandparents watched our son. I visited everyday. Days turned into weeks and still no baby. We hit thirty weeks, then thirty-one, then thirty-two, then thirty three.

Our doctor suspected E might have resealed and was considering sending her home when, at 33 weeks and two days, she started leaking again. This turned out to be a re-rupture (we think) followed two days later by regular contractions. And active labor.

After exactly a month in the hospital on bed rest, E was going into labor. We were having out baby girl at 33 and a half weeks. 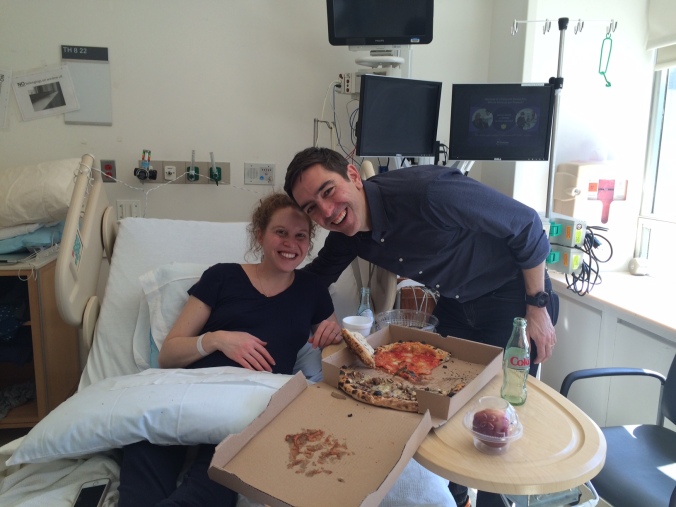 E and I celebrating our five year wedding anniversary.